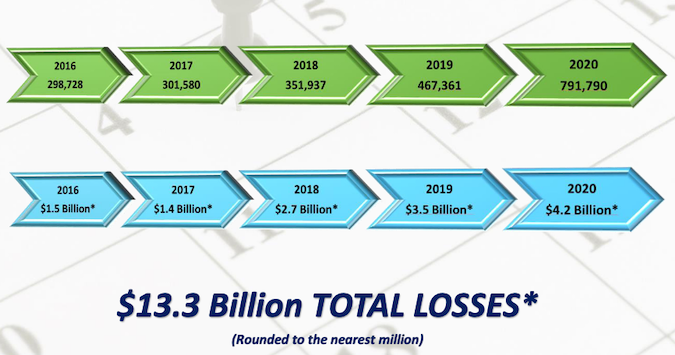 The FBI this week published its Internet Crime Report for 2020, and the agency said it received nearly 800,000 cybercrime complaints last year, with reported losses totaling $4.2 billion.

The number of complaints received by the FBI in 2020 increased significantly compared to the previous year, when it got roughly 467,000 complaints. The total reported losses for 2019 were approximately $3.5 billion. Since 2016, reported losses total $13.3 billion, the agency said.

The FBI said its Recovery Asset Team, which it established in 2018 to help victims recover their money from banks, had a success rate of 82% last year, managing to get banks to freeze $380 million.

In 2020, the law enforcement agency received 240,000 complaints related to phishing, vishing or smishing. Many complaints, more than 108,000, were related to non-payment or non-delivery schemes. Other types of crimes with many complaints include extortion (76,000), personal data breach (45,000), identity theft (43,000), and spoofing (28,000). The smallest number of complaints was related to hacktivists, with only 52 complaints.

In addition to the United States, many complaints came from victims in the UK, Canada, India, Greece, Australia, South Africa, France, Germany, Mexico and Belgium.

In the case of ransomware attacks, the FBI received 2,400 complaints, with reported losses of nearly $30 million, but the organization pointed out that this does not include estimates of lost business, wages, time, or remediation services purchased by the victim as a result of the attack.

There has been a significant increase in complaints related to phishing and non-payment/non-delivery schemes. In the case of non-payment scams, losses increased from $196 million to $265 million, but losses remained roughly the same in the case of phishing attacks. The losses reported as a result of tech support scams, however, nearly tripled from 2019 to 2020.

Eduard Kovacs (@EduardKovacs) is a contributing editor at SecurityWeek. He worked as a high school IT teacher for two years before starting a career in journalism as Softpedia’s security news reporter. Eduard holds a bachelor’s degree in industrial informatics and a master’s degree in computer techniques applied in electrical engineering.